It’s ‘Decembeard’ and time to get the beard growing to raise money for research into bowel cancer. It’s a fantastic cause and, in its honour, here are some beardy sidenotes from history to get us inspired…and donating!

1) Peter the Great’s tax on beards in the eighteenth century is well known. Few people probably know that New Jersey apparently nearly had its own version in the early twentieth century.

In 1907 a member of the New Jersey State Legislature introduced a bill for the graded taxation of men with beards. The mystery legislator argued that men who grew beards not only had something to hide but, worse still, grew their beards for ‘ulterior and often base motives’. The preamble to the bill pointed out that such evil ‘celebrities’ as ‘Holmes the Trunk Murderer’ and ‘Palmer the Poisoner’ were amongst prominent whisker-wearers. As far as the legislator was concerned this was prima facie evidence that beardy men were a criminal class. His proposal was for a tax on facial hair that ran along a sort of scale of what he clearly considered levels of nastiness.

For an ‘ordinary beard’ the tax was levied at $1 per year. This was fairly straightforward. But, from then on, things got a bit strange. For those men whose whiskers exceeded six inches long the charge was $2…per inch. A bald man with whiskers was punished to the tune of $5, while goatee beards were clearly high on the undesirable list, coming in at a hefty $10 levy. The final (and rather inexplicable) stipulation was that, if any man sported a ‘red beard’ (i.e. ginger), an extra 20% was chargeable. What happened to the bill (and indeed whether it was ever meant to be a serious piece of legislation) is unclear. I’m on the case and will report back in a later post! (Thanks to Dr Martin Johnes of Swansea University for alerting me to this)

2) 19th-century industrial life could even have an impact upon facial hair. In 1833, a report on workers in the cotton mills of England painted a black picture of the effects that factory life could have on the human body. Any man, stated the author of the report, who stood at noon at the exit of one of the mills and watched the denizens of the looms pour out, would be greeted by mere shadows of humanity.

Underfed and overworked, factory inmates had sallow complexions, bowlegs and poor posture, raised chests and ungraceful limbs. Perhaps most interestingly, though, it was noted that their ‘hair was thin and straight – many of the men having but little beard, and that in patches of a few hairs, much resembling its growth amongst the red men of America.

3) Bearded ladies have often been the subjects of attention. In the early modern period they might be regarded as ‘wonders’, perhaps a judgement from God relating to immoral behaviour on the part of parents. In fact, at a time when men’s and women’s bodies were viewed as being essentially the same – a woman’s body was effectively the same as a man’s…but inside out! – it was viewed as entirely possible that a woman could have facial hair as a form of extreme femininity.

By the nineteenth century, though, bearded ladies were more likely to end up making a meagre living as part of a travelling ‘freak’ show. But it wasn’t just bearded ladies; there were even bearded children!

In 1866, a traveling exhibition of ‘Living Wonders’ included the ‘Swiss bearded lady and here son the BEARDED BOY’, along with another mystery performer called ‘the Swiss Warbler’. The boy was reputedly 12 years old with a beard over an inch long. This may be the same boy, named as Albert Ghio, described as ‘one of the greatest curiosities of the world’ who was initiated into that most august of institutions, the Sunderland ‘Loyal Antediluvian Buffaloes’ in 1867.

It wasn’t only boys either. In 1877, visitors to the Hotel Province in London’s Leicester Square, could feast their eyes upon the ‘most extraordinary freak of nature in the world’ in the form of ‘PASTRANA – the Mexican bearded girl’.

4) In the eighteenth century, men were only just beginning to shave themselves. Far more common was to visit the barber to be shaved. The problem with this was the discomfort that the poor ‘patient’ often had to suffer at the hands of sometimes-clumsy and cack-handed barbers. Before the introduction around the 1760s of newer, sharper types of cast steel razors, examples before then were made of steel that was brittle, easily blunted and more difficult to achieve an extremely keen edge. As such, customers complained about being shaved with blades as blunt as oyster knives, which left them with stubbly faces as well as a prodigious shaving rash! Cartoonists and satirists had a field day with country barbers.

5) Moustaches have had a long history and connection with the military. Eighteenth-century French soldiers in some regiments grew large, bushy moustaches to represent their rugged masculinity. It was no accident that burly, moustachioed recruits were often at the head of a marching column, their mighty facial hair used to strike fear into the heart of potential attackers.

Another reason for adopting moustaches was inspired by the British Empire. Indian men were proud of their moustaches and were apt to mock their shaven-faced British invaders as fresh-faced adolescents. As a reaction British soldiers began to adopt moustaches as a means of enforcing authority. In 1854 the East India Company’s Bombay army made moustache-wearing compulsory and, in the 1860s, moustaches became compulsory across the British army. In fact, the order was not repealed until 1916. There was some initial resistance on the home front to the wearing of facial hair by men. For some, the adoption of facial hair was a sign that the British were “going native” and adopting foreign customs. By the 1850s, however, the ‘beard and moustache movement’ was in full flower.

6) In history pulling another man’s beard has been a serious insult. More than this, it could actually incite violence! Persian warriors were apparently renowned for their skill in pulling enemy soldiers off their horses by their beards. http://thehistoryofthehairsworld.com/barbers_history.html

In the sixteenth and seventeenth centuries beard pulling was an insult as well as a common source of aggravation. In Tudor times, tweaking another man’s beard carried a fine of two shillings.

Part of the problem was that, like the Persians, assailants recognised the usefulness of the beard as a beard as a useful grip. In 1896 a gang of robbers whilst shopping in Bermondsey set upon the unfortunate James Walkenden. As the man struggled to prevent his assailants from grabbing his watch and other valuables, one of the robbers spotted an opportunity and grabbed Walkenden’s beard, using it to hold his head steady while he punched the man in the face. 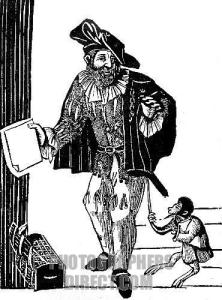 At this point it’s also worth mentioning Edward Wingfield of the James Fort, Virginia, involved in a firefight with local Indians in 1607. Overwhelmed by ‘over 200 savages’ Wingfield was part of a cadre of eleven men trapped in the fort, whose situation looked precarious. Sporting a large beard he made a seemingly easy target for a sharpshooter. But he was lucky. The Indian gunman aimed too low, missing Wingfield’s face, but shooting straight through his beard. This left him with a round hole in his beard and, no doubt, a story to tell his grandchildren!