Shaving the dead in Irish folklore

The Irish Folklore Collection archive in University College Dublin contains a massive volume of documents, sound-recordings and other material collected under the auspices of the Irish Folklore Commission and other bodies since the 1920s. Two of the main elements of the archive are the Schools Folklore, compiled by schoolchildren in the 1930s, and the Main Collection, the work of folklorists working in communities throughout the state. These volumes are in the process of being digitised and transcribed – all of the examples here are from the Schools Collection at www.duchas.ie.

The archive incorporates a huge volume of material on folk medicine, magical cures, care for the dying, and the laying out, waking and burial of the dead. The work of laying out was rarely done by family members. Neighbours or local specialists, usually women, would wash and shroud the remains, and might also be involved in preparing the house for the wake. Great care was taken with the water used to wash the dead. Many accounts suggested it should be disposed of carefully, usually beneath a bush, in a corner, or somewhere where people didn’t normally walk, as it might cause the ground it touched to grow ‘fear gorta’, hungry grass, that would make passers-by feel faint or shaky, or create a ‘stray sod’ that would cause anyone walking over to become lost (‘go astray’). The things used during this time also needed to be treated carefully. Dying people were often placed on a woven straw mat, which would be burned or otherwise disposed of. The soap and towels used might be burned, buried, or placed in the fork of a tree. 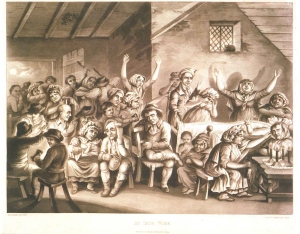 Strictly-observed customs also surrounded the shaving of the dead and the things of shaving. In some areas it seems that all dead men were shaved, while elsewhere only those who had been clean-shaven during life were shaved after death. For example,in Carne, Co. Wexfordin the 1930s‘If a man was wearing a moustache or side whiskers it was shaved off’,[1]and in Sraheen, Co Mayo, it was even said ‘that if a man is not shaved before he is buried he will not go to heaven’.[2]  However, in Kilcommon, Co. Tipperary,‘A man who shaved during life is shaved, while those who wore beards are left there just as in life.’[3]The job of shaving the dead seems usually to have been done by a man, even if women did the washing. Most accounts mentioning shaving the dead agree that the razor used should be given to the man who did the job, though in some places, like Shancurry, Co. Leitrim, it was buried‘no matter how good it is’:[4]some add the detail that no payment should be asked for this work. Shaving a dead person seems to have been considered a tricky matter (cuts and nicks would doubtless displease the relatives). It might be said of a person who was good at sharpening tools that ‘He could put an edge on a scythe that would shave a corpse’.[5] 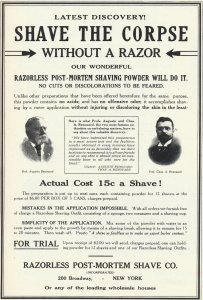 The association of men with shaving the dead is also evidenced in stories concerning encounters between mortals and the ‘Good People’ – the fairies – whose reputation for malevolence and caprice made them widely feared well into the twentieth century. While women might be detained by the fairies to act as midwives or nurses, men were more likely to be roped in to play games or music or, on occasion, to carry corpses or shave the dead – the latter is perhaps understandable in light of the Good People’s alleged aversion to iron. From Shrule, Co. Galway, comes the story of Pat Doherty:

There was once a man coming home from a wake. He had to cross a hill and on the top of the hill there was a little house. When he was near the house he heard a voice saying “Pat Doherty will shave the dead man”. Out ran the fairies from the house and brought him in. Then he shaved the dead man and the fairies gave him tea. When he was going home the fairies struck a weed and it turned into a horse. He got up on the horse and went home. He was putting in the horse into the stable and he disappeared. Then he went in and went to bed.[6]

One Mayo tale told of a man inveigled into both shaving a corpse for some supernatural women and carrying his coffin. Tom Coffey ‘was put astray’ on his way home one night and, exhausted, sought shelter in a house. An old man there died just after Tom arrived, and the two women attending him told Tom ‘he would have to shave him and he said that he never shaved a man in his life. They said that he would have to shave him.’ The women then obliged Tom to make a coffin. ‘They got a rope then and put it around the coffin. They told Tom that he would have to carry it and he [said he] would not be able. They said that he would. They put it on his back. He carried it all night until cock-crow. They told him to leave down the coffin and he did. The two women and the coffin disappeared.’[7]

Another theme of which there are a few examples in the folklore archive concerns the man who braves a haunted house, only to meet a ghostly or otherworldly barber[8]or to be pressed into service as a barber himself. Seamus de Brun of Croom, Co Limerick told the story of a courageous tramp.

There was this great house, and nobody could stay there, because it was haunted. There was a notice on the gate stating that the person that would stay there three nights would get a thousand pounds.

There was a tramp walking the road and he saw the notice on the gate and read it. He went and told the owner that he would stay there. The first night the owner of the house gave him a bottle of whiskey. When he went in, he put down a big fire and sat down on a chair. At twelve o’clock a man dressed in black stood above on the stairs. The tramp said, what are you doing there, but he got no reply. He held on saying that until he fell asleep.

Next morning the owner unlocked the door and left out the tramp. Next night the owner gave him another bottle of whiskey. At about twelve o’clock, four men [came in] and a coffin on their shoulders. They set down the coffin and departed, and a corpse stood up from the coffin and asked him if he would shave him. He said he would, but he had no razor. The man in the coffin said that [it] was all right, as he himself had one. The tramp set to work and shaved him. Thanking him the corpse said that he had been coming here a long time, but had met no man with courage enough to shave him. The corpse told him where there were three crocks of gold and told him keep two for himself, and give one to the owner of the house. Next morning he done as he was told and got the thousand pounds. He was a rich man afterwards.[9]

Clearly prohibitions against payments for shaving the dead did not apply in the case of walking corpses.