I’ve always been fascinated by marginalia in manuscripts – the comments written in the margins, the little drawings or doodles that someone absent-mindedly scribbled onto a piece of paper, in all likelihood blissfully unaware that someone would be reading them centuries later.

Remedy collections have always been a fruitful source for marginalia. The utilitarian nature of remedies invited comments and it’s common to find little notes about how well (or not) a particular remedy worked. This can be specific comments: One of my favourite was the addition ‘This I lyke’ next to a remedy for a cold I once came across. In another instance, an unfortunate patient had noted – next to a particular purge – that it was ‘too hot’ for him! Other things can include the pointing hand (known as a ‘manicule’) next to a favoured remedy, the word ‘probatum’, meaning ‘it is proved’ or, in other words, ‘it works’, and even a smiling face.

This week I’ve been working at the wonderful archive in the Barber Surgeons’ Hall in London. It’s a treasure trove of all sorts of documents relating to the history of the barber-surgeons, from account books to apprentice registers, wills, details of fines and freedoms, portraits, artefacts…even a box full of antique razors. It was great to spend time there, and to see some of the wonderful things in their collection: A huge Holbein painting, for example, or a cup that Samuel Pepys once quaffed from.

On this visit I was looking for information about barbers after the 1745 split, so was looking through various manuscripts. Occasionally, though, and usually when you’re not particularly looking for it, you come across a document that stops you in your tracks. On the desk was a 19th-century manuscript book comprising of notes taken from medical lectures given by John Abernethy, at the anatomy theatre in St Bartholomew’s hospital, London. Abernethy (1764-1831) was an English surgeon and Fellow of the Royal College of Surgeons. Having founded the medical school in St Bartholomew’s hospital in London, and been elected principal surgeon there in 1815, he had become lecturer in anatomy at the RCS in 1814.

The note taker was one E. Long – part of a family hailing from Barham, Canterbury. Long was meticulous and methodical in his note taking. His pages were well ordered, neat and tidy, written in a fine Victorian script, with writing on just one side of each page, leaving the other blank. I’m not sure if Long continued his studies or went into practice afterwards, but the book remained in the family. There it might have stayed and perhaps still found its way into the archives as a fascinating record of the lectures of a prominent Victorian surgeon.

But at some point, perhaps years after, Long’s habit of leaving every other page blank proved tempting to certain younger members of the family. And they didn’t just add a few doodles on the odd page; they filled the reverse side of every page in the book with drawings, paintings, draft letters, copied passages from verses and even practised their writing. The book probably contains hundreds of these drawings, but I’ve picked just a few out.

One image, for example, depicts Victorian soldiers (“of the 93rd”)- perhaps copied from a book. The figure on the right, with his curly hair and beard, seems to have been the subject of particular attention. 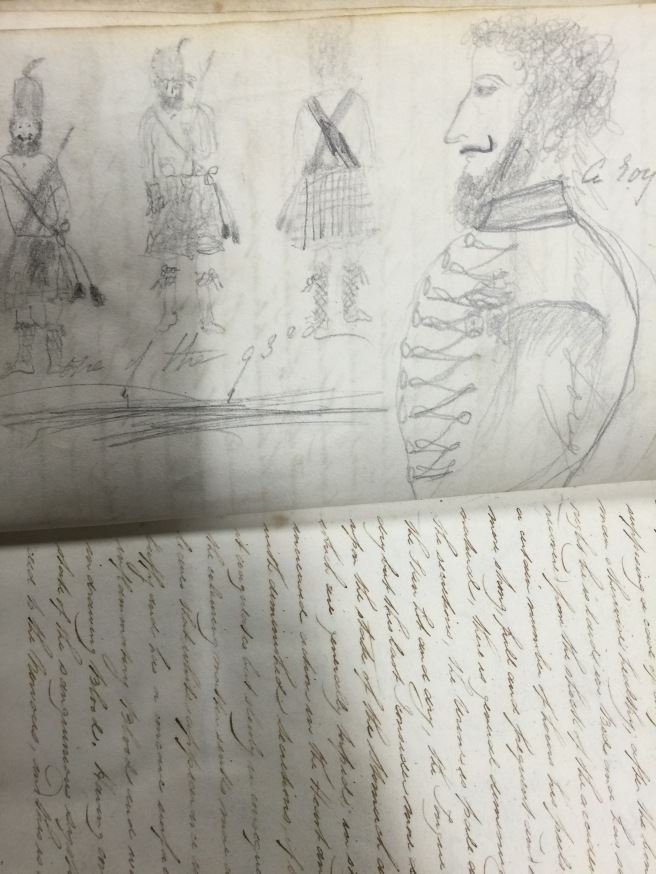 Another shows various heads in profile. Elsewhere in the book there are strong suggestions that some of these images were drawn from life, with an aunt and nanny being mentioned. 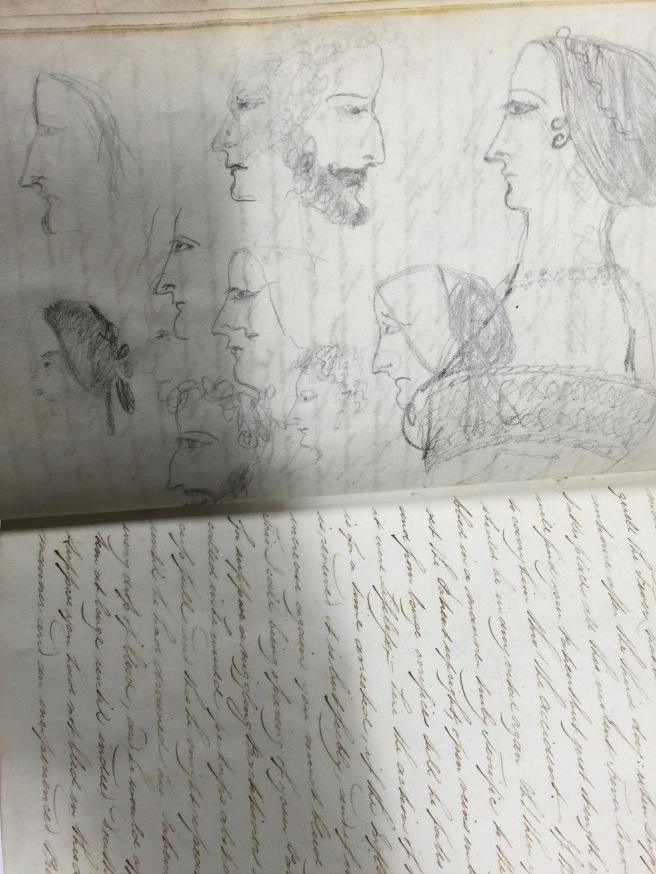 Another shows writing being practised, together with a less defined (and dramatically elongated) body, perhaps betraying the hand of a younger artist. 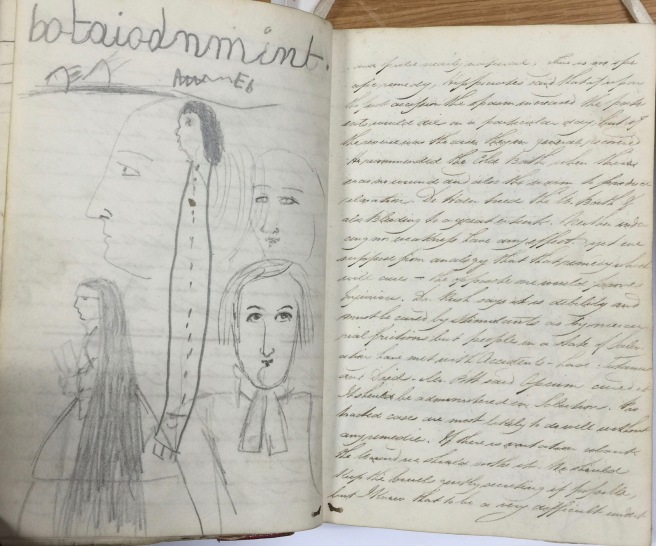 This next page of sketched faces reminded me strongly of the Dickensian ‘Boz’ character faces, with slightly grotesque, grimacing features. 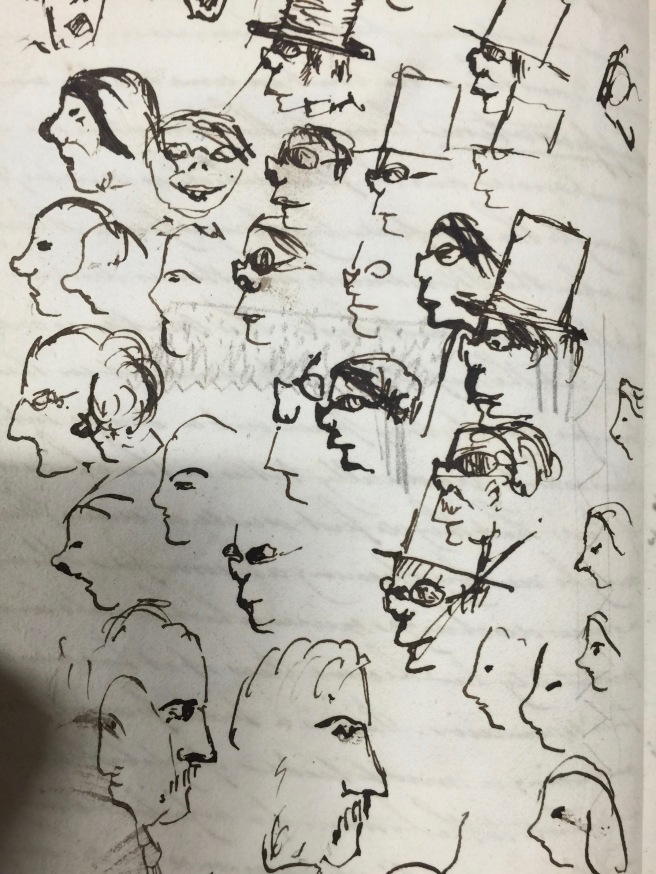 Sometimes the children didn’t even pick a blank page. Was this their own house? 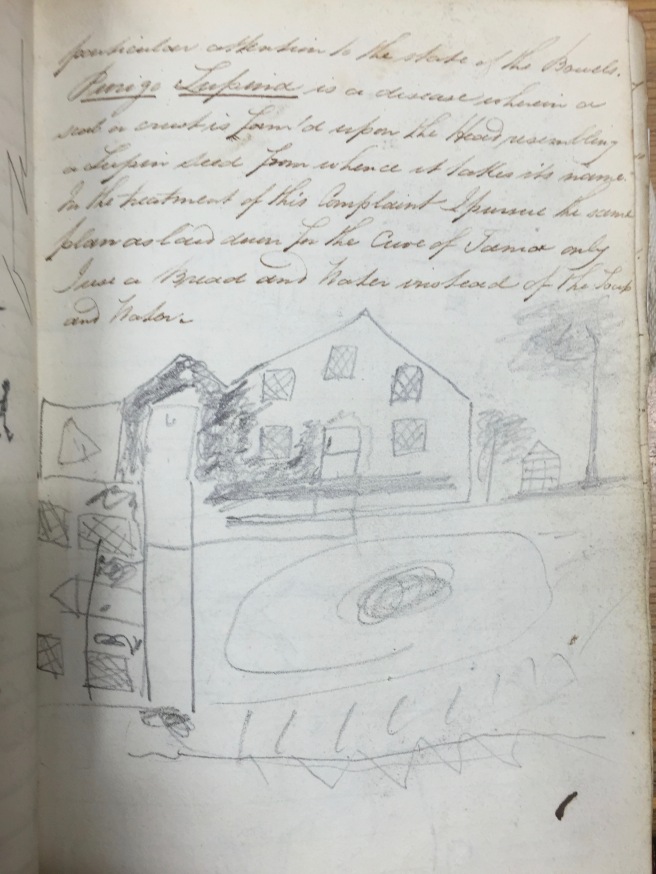 A final one intrigued me: Captioned ‘Dick’s Drive to Dover’, with ‘The Accident’ written underneath, it seems like it might have been copied out of a novel or magazine. If anyone can identify it, I’d be delighted to know! 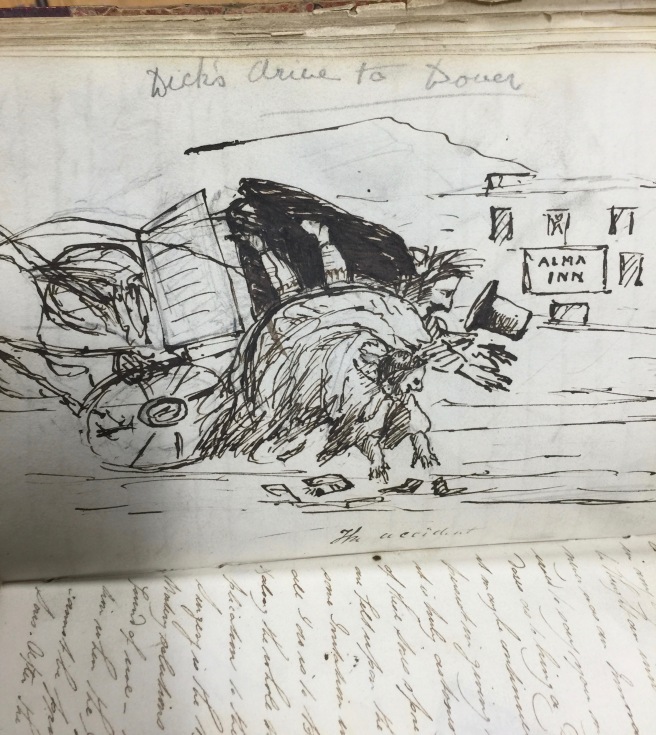 Aside from the obvious charm of the children’s additions, the book stands as a fascinating example of the multiple uses to which historical documents could be put and also, more broadly, the continued utility of books over long periods of time. This is something that early modernists are familiar with. Books – even manuscripts – were lent, gifted, exchanged, bequeathed and, in many cases, continued to be added to over years…sometimes even centuries. Remedy collections can be particularly long-lived in this respect. The Long family book shows the same process, with two completely different authors, the children’s drawings in sharp contrast with the stark medical language of the lectures. What would those children make of their drawings being ‘discovered’ 150 years later? Perhaps more importantly, what was Mr Long’s reaction when he found his lecture notes had become a child’s scribble pad?!