Today is a special post to honour a promise made to my fab groups of University of Exeter History students. Yesterday’s session was all about the 1381 peasant’s revolt. We looked at the various ways in which the rioters were depicted in chronicles, and the many striking similarities in the ways that rioters in recent years have been portrayed in the press. If the Daily Mail had reported on the Peasant’s Revolt, Wat Tyler would doubtless have been depicted in a hoodie!
The students were split into two groups, peasants and nobles, and challenged to report the revolt from their point of view in five tweets…complete with hashtags. Both groups did a brilliant job: enjoy! 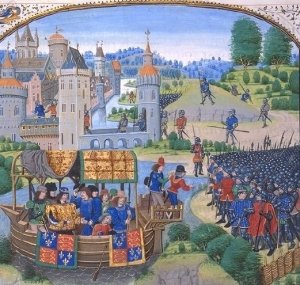 Peasants:
1) Axes on our taxes #thirdwholetax
2) Burning down the house #burnbabyburn
3) We’re coming to get you @simonsudbury @roberthales #offwithyourheads
4) Our captain is dead, our leader has been treacherously killed #shoot #bows #it’snotover #yesitis
5) RT @JohnBall when Adam delved and Eve span who is then the gentleman? #orderdisorder