We’re used to debates about tobacco. In any given week it’s a fair bet that smoking/cigarettes/e-cigarettes will be food for editorial thought. What the UK’s Guardian recently called a ‘global epidemic of tobacco’ is, according to their statistics, a bigger killer than Malaria, TB and AIDS…combined. Recent scare stories have surrounded e-cigarettes, prompting tabloids to ruminate over the question of whether they might even act as baby steps to full-strength cigs. The central problem with tobacco is its undoubted potential to kill. We think of this as a modern debate about a modern affectation. But, in fact, debates about the healthiness of tobacco have raged for centuries. Three hundred years ago, snuff was at the centre of the storm.

One of the most quintessential emblems of the eighteenth century dandy or fop is the snuffbox. By the mid eighteenth century the practice was ubiquitous…and not to everyone’s taste. In 1754 a disgruntled reader known only as ‘T’ wrote to the editors of the Connoisseur magazine, complaining about the practice. 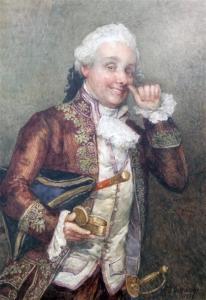 “Dear Sir, I know not if you yourself are addicted to a filthy practice frequent amongst all ranks of people. The practice I mean is that of snuff-taking…[everyone] appears obliged to cram his nostrils with a quantity of scented dirt to fence them from the disagreeable effluvias of the rest of the company…

It is indeed impossible to go into any large company without being disturbed by this abominable practice. The church and the whole playhouse continually echo with this musick of the nose, and in every corner you may hear them in concert, snuffling, sneezing, hawking and grunting like a drove of hogs’.

To illustrate his point further, ‘T’ claimed to have witnessed ‘a whole congregation suddenly raised from their knees in the middle of a prayer by the violent coughing of an old lady, who has been almost choaked by a pinch of snuff in giving vent to an ejaculation’! Any lady who succumbed to this vile practice was, in their view, no better than a serving wench. Why, then, was snuff so apparently popular?

Snuff first came to Europe in the 16th century and was first advocated as a medicinal product, being used to treat headaches and other conditions. Snuff was manufactured from cured and Tobacco leaves were slowly cured and fermented, and certain ‘flavours’ could be added. Snuff quickly found favour amongst wealthy elites, with prominent advocates including Queens, Popes, nobility and prominent society figures. By the eighteenth century everyone from George IV to Samuel Johnson were hawking vast quantities of powdered tobacco up their nostrils. 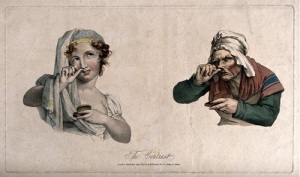 Advertisments promoted special types of snuff. The ‘Golden Snuff’ advertised in the Daily Courant in 1704 counted headache, drowsiness, dullness of hearing and humours in the eye amongst the list of afflictions readily cured. Also of use in ‘Gouty and Rhewmatick paines and for asswaging swellings’, its manufacturers also claimed that ‘it never decays’.Medical authors were divided on the subject. Thomas Apperley’s Observations in Physick considered the potential benefits of a small pinch of snuff against certain conditions, but was cautious of the effects in ‘one not accustomed to it’. In a 1790 Account of Several Excellent and Genuine Patent and Public Medicines a writer known as ‘Castor’ extolled the virtues of the ‘Cephalic Snuff’ in treating ‘hysteric and paralytic complaints’ as well as the ‘Complaints of the Head that Painters &c are subject to’!

Others were far less than convinced. In his 1799 Essay on Regimen James McKittrick Adair railed against the practice of snuff taking, since ‘encrusted snuff impedes the breathing’ while ‘acrid, poisonous oil’ produced by nasal mucous could be highly injurious to the stomach. Adair suggested that the ‘use of tobacco in any form is a vile practice’ and that sniffers of snuff should cleanse their nostrils and wash their mouths with warm water. Dr Allen’s Synopsis of Medicine from 1730 condemned the ‘inordinate use of snuff’ for apoplexy and others cautioned people to beware of the damage that ingesting snuff could cause.

In 1720 an anonymous Dissertation on the Use and Abuse of Tobacco in relation to the Smoaking, Chewing and Taking of Snuff, and was ‘humbly subscrib’d to the Ladies and Gentlemen who use it in the Above ways’. In 1760 Edward Baynard wrote a whole book of poetry about snuff, titled Health: to which are added cautions agains the immoderate use of snuff, devoting 36 densely written pages to his task. Snuff was under attack.

Part of the problem for naysayers of snuff was its popularity. Snuff had become a social ritual, and one popular at all levels of society. Taking a pinch had become embedded in popular culture, and with it came a secondary market in snuff paraphernalia. Snuff boxes, for example, became increasingly elaborate and ornate. As such they were high up the list of desirable items for pickpockets. In 1688 one Claudius Bertin was relieved of a gilt ‘Princes Mettle snuff box’ valued at thirty shillings. Two snuff boxes stolen from the house of the wealthy Don Diego Capyllar in September 1692 were valued at over £5 alone – then a princely sum. 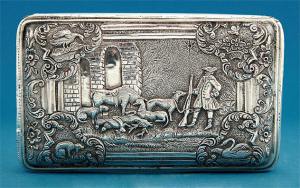 Jewellers and makers made a wide variety of boxes in precious metals and bedight with jewels and ornamentation. In 1765 a Mr Burnsall of London begged leave to keen to acquaint the public of the wide range of goods, including ‘Agate snuff boxes richly set in gold’ that he had for sale in his London shop.

Fans of the product even took to the newspapers to defend their favourite ‘tipple’. A poem found inside an 18th-century recipe collection provided, taken from the Chester newspaper of 1761, proselytized about the power of snuff to lighten the day and preserve the health. The first three verses should be enough to give a flavour:

When vapours swim before ye eyes
And cloud the Dizzy breath
Snuff, to dispel the might applies
Its quick enlivening grain

When pensively we sit or walk
Each social friend away
Snuff best supplies the want of talk
And cheers the lonely day’.

Snuff-taking continued unabated into the nineteenth century; ‘celebrity’ snuffers included Benjamin Disraeli, but the practice gradually declined as it became increasingly viewed as an antiquated relic of the past. Whilst it is still possible to buy snuff today, it is unlikely, given its many nasty side effects including mouth and throat cancer. Unless someone bothers to invent ‘e-snuff’, which seems equally unlikely, then it seems best to consign it to history. Nonetheless, it does provide us with a useful means to look at how people dealt with addictions, and in particular tobacco use, in the past.