According to an article on the BBC Website today, dentists are now beginning to think that drill-free dentistry may soon be possible. Emerging technology will use electricity to force minerals into enamel and encourage the tooth to repair itself. Eventually teeth may even be able to regrow. For the thousands of people with a genuine fear of visiting the dentist, this would be a welcome development.
http://www.bbc.co.uk/news/health-27866399

The poor quality of people’s teeth in the past has long been acknowledged. In the seventeenth century, mouths full of blackened, rotting stumps would not be uncommon. As sugar became more common in the eighteenth century, dental decay became even more problematic, especially amongst the well to do. There is a good reason why people in portraiture do not often display a toothy grin; in many cases their teeth would have looked like a row of condemned houses! Here’s Jean-Etienne Liotard’s engagingly honest self-portrait! 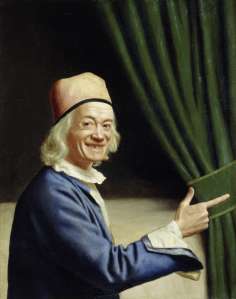 Tooth care was rudimentary and a range of medical interventions existed to try and soothe smarting teeth. In the seventeenth century, it was widely believed that toothache was the result of worms in the teeth. In fact, a condition called ‘teeth’ was a recognised medical affliction and was regularly quoted as a cause of death in the Bills of Mortality. Sometimes they were as high as the fifth or sixth highest cause of death!

As with many aspects of early modern medicine, prevention was better than cure, and a range of techniques were used to keep teeth clean. One method to whiten teeth was to make a mixture of vinegar, honey and salt, add it to a cloth and rub vigorously…but not enough to make the gums bleed. For daily maintenance things like rubbing the teeth with tree bark or chewing herbs such as parsley offered ways to get problematic bits out of the teeth, or to sweeten the breath. The toothbrush did not appear until the end of the eighteenth century in Britain, being an imported fad from France. People were thus forced to use other means.

Once toothache had taken hold, a large body of remedies existed to try and relieve the pain. The popular author Gervase Markham recommended taking daisy roots, stamping them in a cloth before adding salt and liquid, putting this into a quill and ‘snuff it up into your nose’.

Remedies for toothache seem to have attracted some fairly dangerous substances. Mrs Corlyon, author of a domestic remedy collection dating from 1606 advocated boiling sliced henbane roots in vinegar, then heating the roots from underneath to cook away most of the moisture, before holding one of the slices between the teeth until the remaining liquid dripped onto it. Henbane, also known as ‘Stinking Nightshade’ is poisonous and can cause hallucination and some severe psychoactive effects!.

Another remedy, this time from the commonplace book of a Welsh gentleman, Phillip Howell of Brecon, c. 1633, appears even more risky. His remedy involved taking 3 drams of mercury, grinding it on a stone and putting it into a glass bottle. The patient then needed to drop some of the mercury ‘granules’ into the afflicted teeth 3 times a day over two or three days ‘and it will kill the worm and the tooth ache and never troble you ageine’. The patient should take care, cautioned Howell, not to swallow any of it, but spit it out. An early mercury filling…but potentially offering bigger problems than the toothache.

As is also common, remedies did not necessarily have to be applied to the body part afflicted. One recipe for toothache involved putting some ‘Burgamy pitch’ onto leather, sprinkling some nutmeg over it and then applying it to the soles of the feet.

If you had loose teeth and wanted them to stay in your mouth, then Markham suggested first letting some blood through the gums, before taking hartshorn or ivory and red pimpernel (a type of the herb saxifrage), bruising them together in a linen cloth and then laying the cloth to the teeth, promising that this would ‘fasten the teeth’. He neglected the rather vital instruction of how long the patient should do this for however!

Removing teeth was obviously problematic…and painful. Recognising this, some medical writers turned to medical preparations to loosen teeth without the need to forcibly pull them. ‘To Draw Teeth Without Iron: Take some of the green of the elder tree, or the apples of oak trees and with either of these rub the teeth and gums and it will loosen them so as you may take them out’.

If the worst came to the worst though, a range of practitioners were ready, willing and able to pull the offending tooth out. Whist there were no specific dentists, specialist tooth-drawers were often on hand to do the job. Some advertised their services, emphasising their skill in removing teeth without pain. In the 1760s, R. Maggerrus advertised his services in the Public Advertiser as an ‘Operator for the Teeth’ having an ‘infallible method’ and ‘cureing the poor gratis’.

But there were other less obvious candidates. Blacksmiths often ran a lucrative sideline in tooth-removal; they had the upper body strength to pull the offending tooth out, together with the metal instruments to deal with any stubborn ones. Travelling mountebanks criss-crossed the country offering to cure symptoms. Robert Bulkley, a 17th-century Anglesey diarist, noted that he had paid one such figure a penny to cure his toothache. Two days later the mountebank was long gone, but Bulkeley still had his toothache.

Perhaps the day of the ‘regrowing tooth’ is not far away and, for many, this will be a relief. Next time you grin for the camera, though, spare a thought for our ancestors…and offer up a silent prayer that you live in an age of relatively pain-free dentistry!

Firstly, apologies for the hiatus from the blog; it’s proving to be a busy summer, and this is my first post as a BBC/AHRC ‘New Generation Thinker’ – no pressure then!

I’ve now started work on my second book, which relates to the history of technologies of the body in the eighteenth century. The book will look at the ways in which people increasingly used objects to fashion their bodies, and the relationship between these objects and new materials, such as steel. There are chapters, for example, on razors, spectacles, rupture trusses and bodily ‘ephemera’.

As I’ve been building up my secondary reading on eighteenth-century views of the body, it occurred to me that very little work has been done on the history of the hands. Lots of articles refer to hands as metaphors or explore, for example, the importance of hands in manufacturing. But far less attention has been paid to the aesthetics of the hand. This is surprising because, in many ways, the hands were both literally and symbolically important in the enlightenment. 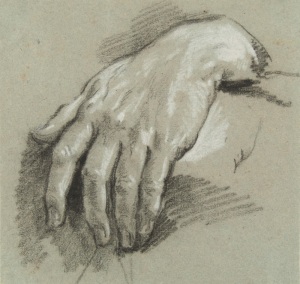 In the second half of the eighteenth century, the body became more ‘polite’. It was important for people to look a certain way; to dress in particular clothes certainly, but also to try and achieve an ideal body shape. Any sort of bodily deformity or deficiency was socially undesirable and carried connotations of immorality or low status. An increasing range of corrective products was being manufactured and marketed for people desirous of a socially pleasing form.

An important component of the ‘polite body’ was the hand. Nicholas Andry was one of the first to define the ideal hand, in his famous work Orthopaedia. Andry dedicated long passages of his book to defining the perfect shape for various limbs. One section, for example, was titled ‘What shape the ARMS, HANDS, FINGERS and NAILS ought to have to appear handsome’. For Andry, hands should be ‘well-shaped…delicate, pretty long and not square’. Some hands, he argued, looked like ‘shoulders of mutton on account of their breadth and length’. Whilst useful for catching things they were, he reasoned, the worst shaped.

The hand should be covered with a ‘fine smooth skin…and the fingers should have an Air of Freedom and Mobility’, and be long and fleshy. The knuckles should leave small dimples when the fingers are extended. A long section was dedicated to the perfect proportions of the fingers. The index finger, when stretched out, for example, should end precisely at the root of the nail of the middle finger. All this was important, argued Andry, since the hands were the ‘Principal Organs of Touch’. In an age that privileged the senses above all things, this was a vital point.

Books instructing artists on the correct proportions of the hands were also appearing in an age where painters like Joshua Reynolds were busily establishing rules of composition and ideals of appearance. A white, smooth and delicate hand bespoke refined living and sound attention towards personal grooming. A rough, calloused hand was the domain of the manual worker. We can only imagine the thinly-disguised distaste at taking the hand of a lady at a society ball, only to find rough nails, warts and ‘onions’. It sounds frivolous, but was actually a very serious matter.

The importance of the hands is reinforced in other ways, not least in the increasing marketing of products for hand and nail care. From around 1750, for example, a range of practitioners began to specialise in hand and nail care, and advertised their services. In the seventeenth century and before, corns, callouses, warts and ingrown toenails were dealt with by so-called ‘corn cutters’. A range of techniques might be used, from incising the offending callouses off, to attempting to treat with various creams or pastes. By the later 18th century, however, the first ‘chiropodists’ were beginning to appear.

One of the most prominent was D. Low of London, chiropodist and author of his own book on the treatment of ‘Corns, Onions, Callosities and Warts’. Low offered a range of services to the paying public, claiming that his ‘process is safe and easy, without the least unpleasing sensation or danger’. It had, he argued, been met with universal approbation. A number of other specialists quickly jumped on the bandwagon. J. Frankel of Germany arrived in high feather from Germany and ‘acquainted the nobility, gentry and others’ that he was ready to serve them. He was keen to stress that he was ‘Famous for cutting nails…without the least pain or drawing blood’.

Medical self-help books were full of recipes to beautify the hands and preserve their delicate appearance. Works such as Amelia Chambers’ 1775 The Ladies Best Companion contained a number of recipes such as beatifying waters, containing a range of ingredients from white wine to lemons, leeks and lillies, which softened the skin of both face and hands. The exotically-named Toilet of Flora, published in 1775, contained a similar range of preparations from ‘Venice toilet water’ to a beautifying wash, and a paste to remove freckles from the skin. Ready-made potions such as ‘Dr Solomon’s Balsamic Corn Extract’ promised to remove callouses and warts without the need for cutting, and were available for a shilling or two per box.

As ‘principle organs of touch’ the hands were important in the eighteenth century. Those able to afford to do so lavished much expense and attention upon them, at least. How the lower orders cared for their hands, if they did at all, is far more difficult to recover, but the ready presence of beauty washes in remedy collections, and the lively culture of sharing medical recipes, hints that people, perhaps especially women, paid attention to them. More work needs to be done to tease out the hidden meanings of the body, and the types of materials, goods and processes involved in bodily self-fashioning. I’m certainly on the case….and I feel the hand of history on my shoulder.

Sorry. I’ll get my coat.