Whilst I was a research fellow at the University of Glamorgan, working with Professor Chris Evans, I was lucky enough to be part of a project far away from my usual research on Welsh medical history, but one which opened my eyes to an extraordinarily fruitful and fascinating area of research.

As the sociologist Richard Sennett commented, the eighteenth-century body was a ‘mannequin’ upon which were hung conventions of fashion, taste and politeness. Historians, however, have been slow to recognise the important influence of ‘enlightened’ manufactured goods in this process. New industrial technologies yielded products aimed specifically at the body, of which articles made from steel were central. Steel is not often thought of in terms of its contribution to culture, but rather as a prosaic industrial material. Technological breakthroughs between the 1680s and 1740s (such as Huntsman’s crucible steel) made steel an increasingly abundant and important good. It was, however, a material that could actually play a role in the fashioning of a new, refined self, and was indeed vital for some of the most personal rituals of everyday life. It was the metal with which people had the closest, even the most intimate, physical contact.

Razors were a prime example of this. Better steel enabled razor-makers to produce blemish-free, durable and more comfortable blades. Pre-crucible steel razors tended to blunt quickly and, although sharp, were not superbly keen. Part of the reason for this was the use of pre-Bessemer cementation steel, which was more brittle due to the less than uniform distribution of carbon. Crucible (or cast) steel razors were far superior; not only could they carry a much sharper edge, they could be polished to a mirror-like shine, making them far more aesthetically pleasing for consumers.

Indeed, when advertising their wares in popular publications, it was to domestic consumers rather than professional barbers that they most often appealed. Personal razors allowed their owners to meet expectations of refinement and social order. Shaving the face evinced gentlemanly neatness and elegance, while shaving the head prepared it for the wearing of a wig – an expression of genteel masculinity.

Cast steel had effects in other ways. Its ability to take a sharp edge also influenced the design of surgical instruments, for example, and this led to changes in operative techniques, which had implications for both the patients and practitioners of surgery. The amputation knife was one such instrument. The standard amputation knife around the mid eighteenth century was long and straight – something resembling a chef’s knife today! But advances in steel allowed a new, curved design. This allowed surgeons to use a more natural cutting stroke around the leg, cutting through the soft tissues more quickly, before sawing through the bone. Given the risk of losing a patient through hypovolemic shock in pre-anaesthetic surgery, speed was of the essence.

The springy strength of steel was likewise indispensable for medical paraphernalia from trusses to deportment collars. Here, steel was a pure Enlightenment good, scientifically honed to improve or correct nature’s vagaries. As makers of ‘elastic steel trusses’ frequently emphasised, steel was the only material with which they could claim to cure hernias or ruptures. Steel ‘neck swings’ could be used to force the body back into its ‘natural’ shape, while deportment collars and steel ‘stays’ encouraged young ladies and gentlemen to stand up straight. 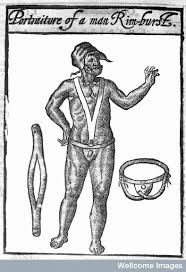 Other devices benefitted from the development of new types of steel. It could, for example, be employed in fixing correctional devices to the body, such as the flexible springs in spectacles’ side arms. Spectacles became a permanent part of costume, with an aesthetic value in their own right. In this process, they ceased to be indicators of bodily deficiency and acquired more positive associations (learning and sagacity), as archival and artefactual collections at the College of Optometrists can demonstrate.

One of the most visible uses of steel, though, was in costume jewellery. By the mid eighteenth-century, jewellery was strongly in vogue amongst the upper echelons of society. As Marcia Pointon has noted, diamonds were the very height of luxurious and conspicuous consumption, and costume jewellery reflected a range of social mores and rituals related to society ritual and appearance. Prohibitively expensive, the potential market for these precious stones was therefore extremely limited.  But steel offered new possibilities as an ersatz precious metal; here was a material which could offer all the decorative allure of diamonds, but at a fraction of the price. Cut and faceted into imitation stones known as ‘brilliants’, cast steel sparkled. With flat surfaces polished, it shone like a mirror.

By the late eighteenth-century demand for cut-steel jewellery reached across Europe and appealed to royalty as well as affluent middling sorts with disposable income to match their social aspirations. Fashionable gentlemen increasingly bought cast steel watch chains, both to support their newly modish gold and silver watches, but also as a costume adornment in their own right. Added to these chains were a further range of accoutrements such as seals and lockets, which further served to draw attention to the means of the wearer. In the 1760s, chatelaines made from ‘blued steel’ presented a ‘gamut of metallic hues’. Glistening steel buttons also became an essential part of the dress of the Beau Monde, so much so that their effulgence was satirised in cartoons such as Coups de Bouton, showing a society lady cowering in the face of the blinding light reflected in the buttons of her rakish companion. But this perhaps also worked on a deeper level. Steel jewellery reflected the light but, in doing so, it also perhaps somehow reflected the spirit of the age – literal enlightenment.

It is often surprising what even the most basic of materials can reveal about society and culture, as well as the technological processes involved in making them. Steel was in many ways a ‘crossover’ between technology and culture; it was both a product of the enlightenment, and something that acted as a vector for enlightened ideals, through the various uses to which it was put.

2 thoughts on “Steel and the body in the Enlightenment:”