Over the course of the past four or five years or so, one of the biggest growth areas in the personal grooming industry has been in products for cleaning, styling, or beautifying the beard. A whole host of options are now available, including beard oils, moisturisers and styling waxes, specially dedicated beard trimmers, and even templates, offering a myriad of different options for sculpting the preferred look.

As I’ve been studying the history of men’s personal grooming in the past, I was interested to see if beard grooming was just a modern thing, or if there was a historical precedent. The obvious place to start was in the Victorian period, when large numbers of men were sporting prodigious facial hair. Surely, with all these huge beards on show, keeping them pristine must have been important?

As I’ve mentioned many times in other posts, the Victorian beard was a statement of manliness. It spoke of supposed natural male authority, strength and even virility.  It was, as H.W. said in 1855, in his article ‘Beards and their Bearers’, a “cherished ornament”. And this was a case where bigger was regarded as better. Men were extolled to let their beards grow long, full and ‘natural’, an outward symbol of the power that lay within.

But therein also lay an important point. The emphasis upon ‘natural’ suggested that, rather than being clipped, shaped, oiled or waxed, beards should be left to do their own thing, as prolix and rampant as possible. In the early 1850s, there were sustained attacks on shaving, which was set up as a potentially dangerous act – one that robbed the body of a key source of protection against dust or germs but, even more importantly, sapped the strength from a man’s body. With shades of the Biblical character Sampson, the American Presbyterian minister and dietary reformer Sylvester Graham argued in 1849 that the “habitual shaving of the beard diminish[ed] the physiological powers of man”.

At the same time as attacks on shaving, came stern warnings to men about the dangers of artifice in appearance. Whilst they should by no means be slovenly, neither should men be too absorbed or finical in their appearance ‘from whence commences vulgarity’. There were also sexual connotations. Victorian men who spent too much time in front of a mirror, or were too keen on cosmetics, risked suspicions of effeminacy. 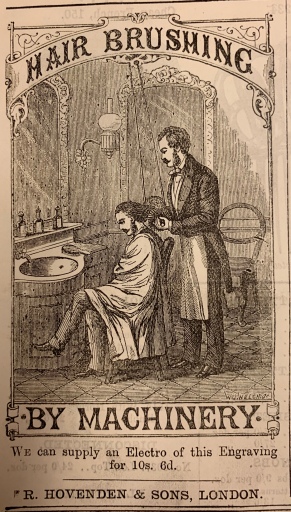 But this is not to say that beard care was entirely absent from discussion. Men’s etiquette and conduct manuals did contain some advice about how to manage and care for a beard. Above all things, most authors agreed that beards should be kept clean.

Brushing was important, not only in keeping the beard luxuriant and shiny, but also in rescuing small bits of food that had become trapped in the undergrowth. As the authors of ‘Good Manners’ suggested in 1870, “The beard should be carefully and frequently washed, well-trimmed and well combed, and the hair and whiskers kept scrupulously clean, by the help of clean, stiff hair brushes, and soap and warm water”.

A little trimming or clipping was permissible, to keep everything neat and tidy since having a scruffy, unkempt beard suggested slovenliness, and it was considered ‘quite the usual business of a man’s person to trim the beard’. For those who could afford it, a valet or manservant might also do the job. As Isabella Beeton’s Book of Household Managementpointed out, a good valet should “brush the hair, beard and moustache, where that appendage is encouraged, arranging the whole simply and gracefully according to the age and style of countenance”.

Applying any cosmetics to the beard, though, was actively frowned upon, and there were even some suggestions that the products themselves were unpleasant. An article in the Hairdresser’s Journal in July 1868 noted the use of iron dye, containing hydrosulphate of ammonia and hartshorn for colouring beards and moustaches but noted that the ‘abominable odour’ and ‘putrid smell’ of the ingredients meant that ‘any fellow who would apply this hateful thing to his facial hair must be strong of stomach, and not over delicate as to the sense of smelling’.

Indeed, although there were many (often delicately scented) products for shaving available across the nineteenth century, there are only fleeting references to cosmetic products specifically for beards.

Nineteenth-century men, then, didn’t really go in for beard sculpting, in the belief that the beard was best left to grow ‘natural. And whilst today the idea that beards might be dirty still resurfaces from time to time, the Victorians had that covered. As ‘Xerxes’ wrote in the Folly and Evil of Shaving in 1854, “the beard keeps away nearly the whole of the dirt from the face, [and] does not prevent soap and water from penetrating beneath it to remove what dirt may accumulate there”. As such, they reasoned, “it follows that that portion of the face covered by the beard must be cleaner than the part not so covered, as well as cleaner than the head”. So, there you have it. Bearded men are the cleanest around!

One thought on “Beard Sculpting in the 19th Century.”