Last week, hordes of hirsute men descended upon Antwerp in hopes of securing a prize at the World Beard and Moustache Championships. This has become a major event, attracting thousands of entrants, and headlines all across the world. It has also spawned a whole host of smaller versions which, again, prove extremely popular. (I can speak from experience here, having been lucky enough to be a guest judge in the Devon and Cornwall beard and moustache competition a couple of years ago!) The first world championship was held in 1990.

But, quite by accident, whilst trawling through Victorian journals in the British Library, I’ve chanced upon an earlier example than that. In fact, quite a lot earlier. Actually… nearly 150 years ago!

In 1873, advertisements began to appear in newspapers around the country for “The First Beard and Moustache Show” to be held at North Woolwich Gardens in London on 30 July. The idea came from its proprietor – William Holland – theatre owner, impresario, and regular organiser of public entertainments for working class East Londoners. With thanks to Lee Jackson, (owner of the fab Victorian London site, and author of ‘Palaces of Pleasure’) for sharing some of his gems, amongst Holland’s other recent events had been a ‘beautiful baby’ show and even a ‘Barmaid show’, which involved being served drinks by different barmaids and voting for whichever you thought was the best! 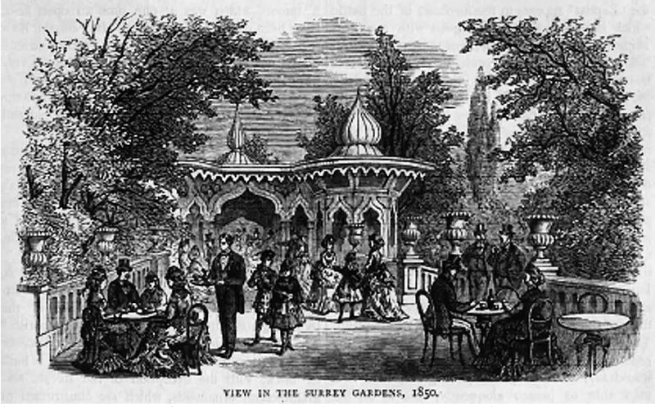 The advertisements advised suitably bearded men (and the public) of the date and venue, and Holland clearly had hopes of attracting a big audience. Prize medals were promised for all winners, and the event was to be judged by a “jury of ladies”, drawn at random from the expected crowds, who were to determine the “best cultivated hirsute appendage”!

Generally, the idea seemed to be quite well received. A journalist in the Sporting Times wrote of his disappointment at not being able to attend the event, fully supporting the need for such a show, and even offering advice for the judges. It was not necessarily the biggest, longest or thickest beard or moustache that should win, he suggested, but whichever’s “colour, form and cut” was most aesthetically pleasing. But, noting the comments of a female friend who pointed out that, as a rule, ladies preferred “plenty of hair on the male subject”, he seemed resigned to the fact that the “shaggiest monster” would likely win the prize!

A hack in the East London Observer was less impressed. “The novelty of the thing will no doubt make it a profitable speculation, but what about those who go to show themselves and, still more, who are they who will go to look at them? Beards and moustaches, disgusting”.

According to one report there were around thirty entrants. Unable to attend on the day, one hairy hopeful, apparently a “Mr Charles Chaplin, resident somewhere in Essex” (but unlikely to be THAT Charles Chaplin!) even sent a “specimen of his beard” by post, which was over forty inches long. Another entrant claimed to have a moustache that dangled down sixteen inches on either side of his face…an impressive 32 inches from end to end!

Despite this promising start, however, it seems that things didn’t necessarily go so well on the day. First, it seemed that the event had not attracted the large audience that it probably merited, and reports suggested that it was quite thinly attended.

But worse still, sniffy reports also appeared in the press suggesting that the show itself hadn’t exactly been a rip-roaring success. According to Reynolds’ Newspaperon the 3rdAugust, there were only six competitors; five who showed up on the night, plus the man entering by post. The winner was one “Mr Gordon, blessed with a fine, glossy, flowing beard”. But in the moustache category there was only one entrant – a moustachioed man with a wooden leg, forcing Mr Holland to stand in order to at least make a contest of it. Holland was apparently renowned for his own trademark moustache, and “Holland’s points [were] known all over London”. According to the report, “the prize was generously conceded to the gentleman short of a limb”.

It was also reported in The Era, quoting Mr Holland himself, that some of the competitors proved nervous and reluctant to submit themselves to judgement. Candidate number one took the stage “looking very foolish and trembling at the knees”. Number four had “nothing worth calling a beard”, and the facial hair of another was “scrubbiest among the scrubby”. Only Mr Gordon, the eventual winner, stood out, “proudly conscious of his hairy superiority”. It was noted that, rather than staying to enjoy the approbation of the ‘crowd’, the entrants were keen to make their exit as swiftly and expediently as possible.

Neither, it seems, were the jury of 12 ladies entirely enamored of their new role, appearing reluctant to touch the entrants’ hairy appendages, and generally seeming embarrassed to be there. All in all, as reports in several newspapers attested in similar terms –  “it wasn’t much of a success”.

If all this is true, it begs the question as to why? Why in what was, after all, a golden age for the beard, did Mr Holland’s innovative event not capture the public’s imagination and become a celebrated and regular event? The answer, I think, is simply that his timing was out.

By 1873, the great Victorian ‘beard movement’ was in its third decade – a long time for any fashion. The young bucks who formed its vanguard in 1853 were, by now, hurtling headlong into middle age. Some of the arguments made in support of the beard, once so compelling, had now began to lose their potency. As I’ve discovered in the process of my project on the history of facial hair too, by the last quarter of the 19th century, younger men were beginning to return to the shorter, neater styles of facial hair and, indeed, to the shaved face.

Sadly, it is likely that Mr Holland’s groundbreaking Beard and Moustache Show was probably around 15 years too late. To be fair, it doesn’t seem to have dampened his spirits, and he continued to put on all sorts of weird and wonderful entertainments for the discerning folk of London. So, out of respect to him and his innovative ideas, let’s instead say that William Holland was ahead of his time, and that it took the rest of the world 117 years to catch up!

4 thoughts on “Uncovered: The First ever Beard and Moustache Competition?!”